“Today’s MRE is an excellent milestone in our value enhancing and systematic de-risking initiatives for the Chester Project. Our exploration efforts to date have improved our understanding of the geologic model and resulted in a larger and more robust copper resource. Regional exploration continues at the Chester Project which will help build on this growing copper resource. Presently, 80% of the resources are within 100 meters of surface at +1% Cu grade, and the deposit remains open along strike and at depth.”
—Simon Quick, CEO of Canadian Copper

Next Steps for the Chester Project 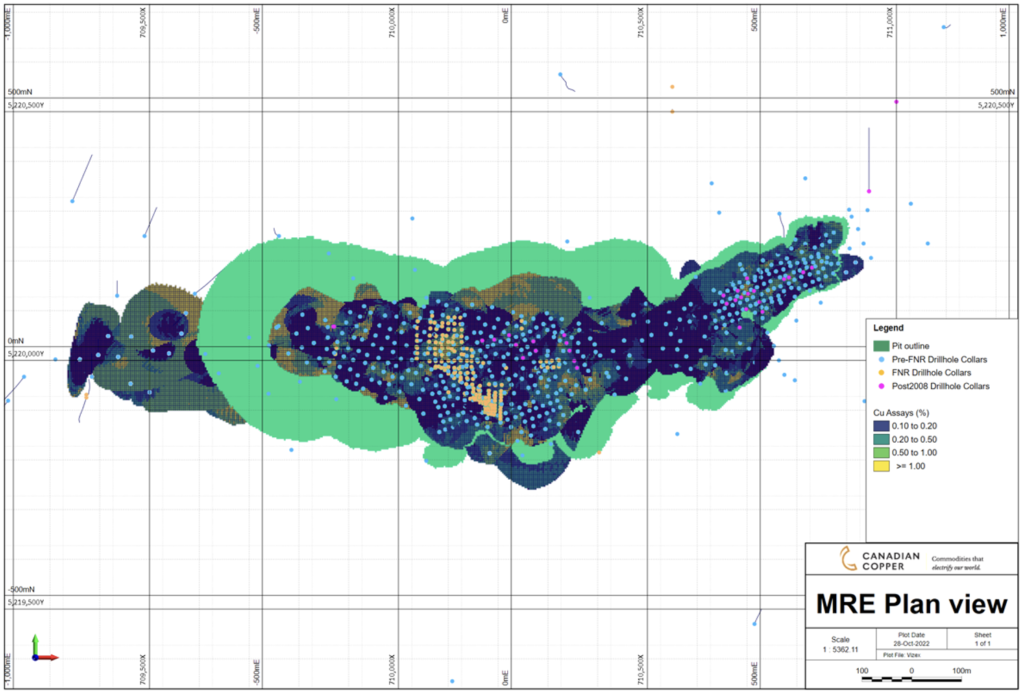 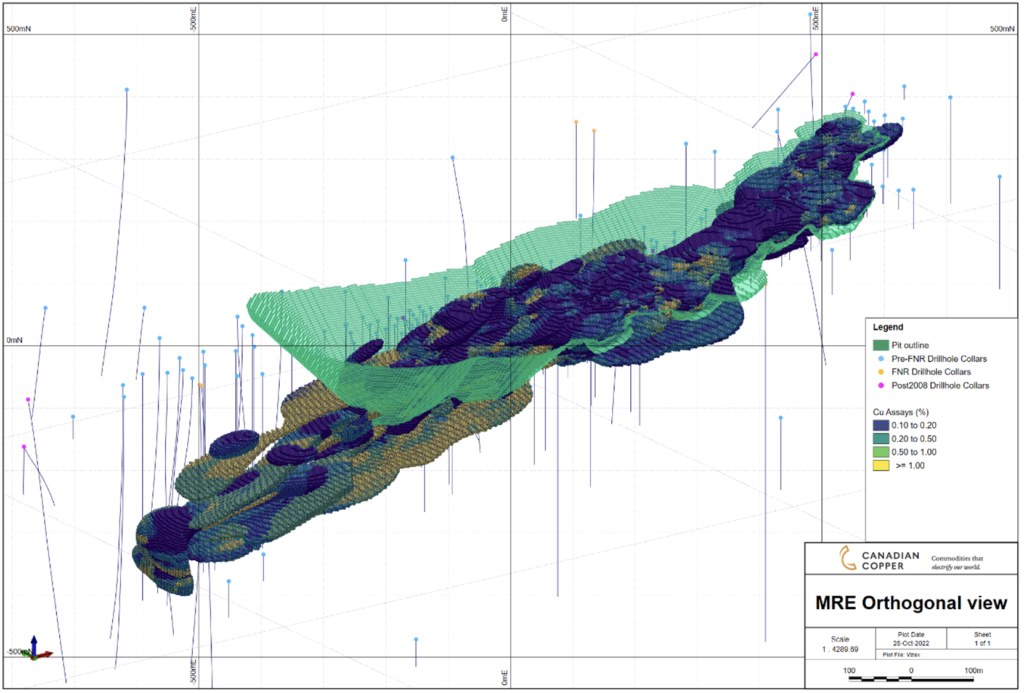 Parameters used to constrain the MRE within an open pit shell

A sensitivity analysis is presented below to help conceptualize grade and tonnage estimates at various cut-off grade increments for the Chester deposit. This is not to be interpreted or construed as the base case of the Mineral Resource Estimate discussed above. Table 3 displays current copper MRE at 0.5% cut-off as groups of domains with potential by-product metals. 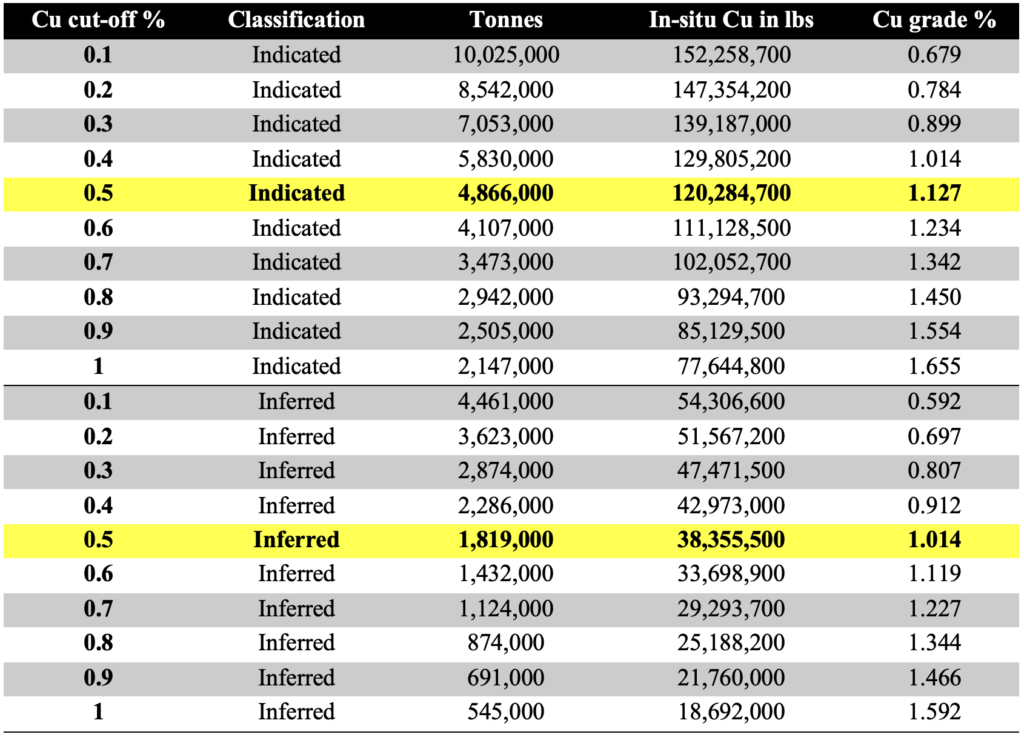 The Chester drill hole database, including drill hole surveying, analytical methods, QA/QC protocols and corresponding sample preparation and shipment procedures have been reviewed for historical and current drilling by Mr. Michael Dufresne, M.Sc., P.Geol., P.Geo. and is deemed to be of sufficient quality for resource modelling. The drill hole database contains a total of 712 drill holes with 64,787 meters drilled and 15,330 sample intervals assayed for copper. A total of 43 holes were completed by Canadian Copper and Puma between 2014 and 2021. A total of 191 holes were completed between 2003 and 2007 by First Narrows. A total of 478 historical holes were completed by a number of prior companies between 1963 and 1999. Standard statistical treatments were conducted on the raw and composite samples with a resulting composite length of 1.5 meters for the estimation and a capping limit of 8.7% Cu up to 10.15% Cu, utilized for various domain groups for the Chester Project. Areas and/or domains dominated by pre-2000 drill hole data were estimated but are classified as inferred until such time as modern confirmation drilling is conducted.

The effective date of the Mineral Resource Estimate is October 27, 2022. A NI 43-101 technical report prepared by APEX Geoscience Ltd will be filed on SEDAR at www.sedar.com within 45 days of this news release and will be available at that time on the Canadian Copper website.

For readers to fully understand the information in this news release they should read the technical report in its entirety when it is available, including all qualifications, assumptions, exclusions and risks. The technical report is intended to be read as a whole and sections should not be read or relied upon out of context.

Mr. Michael Dufresne, M.Sc., P.Geol., P.Geo. is President and a Principal of APEX Geoscience Ltd. and is an independent QP. Mr. Dufresne is responsible for the Chester MRE and has reviewed and approved the geological information reported in this news release.

Dominique Gagné, PGeo., is a qualified person as defined by Canadian National Instrument 43-101 standards who is working for Geominex Inc., an independent contractor of the Company. Mr. Gagne has reviewed and approved the geological information reported in this news release.

About the Chester Copper Project

The Chester copper deposit (“Chester”) is a volcanogenic massive sulphide (“VMS”) resource containing three zones; the Central Zone (massive sulphide), the East Zone (massive sulphide), and the West Zone (Copper Stringer), which are all located near surface. Previous mining development in 1974 included a 470-meter decline targeting the West Zone and produced 30,000 tonnes of bulk sample material grading +2.0% Cu (Geoscience Canada, McCutcheon, 2020). No other development has occurred on the property.

About the Bathurst Mining Camp

The Company is focused on the prolific Bathurst Mining Camp of New Brunswick, Canada. This region is a world class mining district with thirteen former mining operations and hosts more than forty-five known volcanogenic massive sulphide (“VMS”) deposits. Our flagship Chester Project is 75 km south of the renowned Brunswick #12 mine that operated for 5 decades. New Brunswick has the modern infrastructure needed for mineral exploration and mine development coupled with a clear and well-established regulatory environment.

Drill core is cut in half, one half of the core is taken as sample. Samples are bagged and sealed by Geominex, and sent to the facility of ALS CHEMEX in Moncton, New Brunswick where each sample is dried, crushed, and pulped. The samples were crushed to 70% less than 2mm, riffle split off 1kg, pulverise split to better than 85% passing 75 microns (Prep-31B). A 30-gram subsplit from the resulting pulp was then subjected to a fire assay (Au-ICP21). Rock sample ICP results with gold >1g/t were subjected to a metallic screening (Au-SCR24) 1kg pulp screened to 100 microns.

Canadian Copper is a Canadian-based mineral exploration company with a copper and base metals portfolio of historical resources and grassroots projects. The Company is focused on the prolific Bathurst Mining Camp (BMC) of New Brunswick, Canada.

Neither the CSE nor its Market Regulator (as that term is defined in the policies of the CSE) accepts responsibility for the adequacy or accuracy of this release. 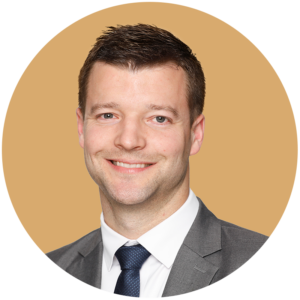 Simon's experience includes early stage permitting, project development through to design engineering, construction, and final turnover. He joins Canadian Copper from McEwen Mining Inc. where he was Vice President of Projects. He has an honours degree in Economics from Bishop’s University and an Executive MBA from the Kellogg School of Management at Northwestern University.